Skip to content
It’s been eight months since the last big Hindi film, ANGREZI MEDIUM, hit screens. Once the lockdown kicked in, films began to go online, even the ones starring A-listers. But producers of some small films decided to wait for cinemas to reopen. Last month, cinemas finally got the go-ahead in most parts of the country while on November 5, the prime state of Maharashtra too gave its nod. This prompted Zee Studios to release SURAJ PE Mangal BHARI on Diwali on the big screen. The trailer of the film has been impressive and carries a good vibe. So does SURAJ PE MANGAL BHARI manage to entertain and give viewers a good time? Or does it falter? Let’s analyze.

SURAJ PE MANGAL BHARI is the story of a feud between a wedding detective and a dairy owner. The year is 1995. Suraj Singh Dhillon (Diljit Dosanjh) is a single guy from Mumbai and the heir of Jai Mata Rani Doodh Bhandar. He lives with his father Gurnaam Dhillon (Manoj Pahwa), mother Yeshodha Dhillon (Seema Pahwa) and sister Guddi (Vanshika Sharma). His parents are looking for a right match but their efforts are futile. Suraj’s sidekick Sukhi (Manuj Sharma) tells him to be ‘cool’ and a ‘bad boy’ and that it would help attract girls. Suraj likes the idea and as part of his stint as a cool bad boy, he breaks the traffic signal and consumes alcohol in front of a girl’s college. Meanwhile, his parents find a match for him. An excited Suraj goes to the girl’s house with his parents. But the girl’s parents refuse their proposal because they had the pictures of Suraj while he was in his ‘bad boy’ avatar. Suraj is dejected and is dying to know who clicked his pictures after all. After cajoling the Pandit Dubey ji (Neeraj Sood), he gets to know that it’s none other than Madhu Mangal Rane (Manoj Bajpayee), a wedding detective. He believes it’s his job to find flaws in the to-be grooms and thus save the lives of gullible girls and their families. Suraj wants revenge but does not know how. He then realizes that Mangal has a sister, Tulshi Rane (Fatima Sana Shaikh). He decides to fake a relationship with her in order to get back at Mangal. However, he falls for her in real. He expresses his love to Tulshi. She however is hiding a shocking secret about her life and passion. This secret gives Suraj the much needed opportunity to damage Mangal’s reputation. At the same time, it can also dent his marriage prospects with Tulshi. What happens next forms the rest of the film.

Shokhi Banerjee’s story is very interesting and entertaining. One might feel that the makers revealed almost the whole plot in the trailer. But that’s not the case as the film has a lot more to offer. Rohan Shankar’s screenplay is entertaining for most parts. The various twists and dramatic points are well fleshed out. However, a few rough edges remain. Also, the humor quotient is limited. Rohan Shankar’s dialogues are hilarious and a few of them are sure to induce claps.

Abhishek Sharma’s direction is neat. He deserves brownie points for keeping the mood of the film light from start to finish. The film never gets too heavy, even in no-nonsense situations. Also, the film is replete with some very quirky characters and he makes good use of them to add to the fun. Moreover, the film celebrates the Marathi culture and the middle-class lifestyle of the city. It fondly also reminds one of the simple, slice-of-life films made by Hrishikesh Mukherjee and Basu Chatterjee. On the flipside, some of the portions of the first half aren’t upto the mark, especially the ‘Bad Boy’ sequence. A few developments are hard to digest, especially the track of the professor deciding not to take any action against his wife despite the latter cheating on him. Also, the manner in which Madhu plans the breaking off the engagement ceremony of his sister is a bit too much. Mangal’s change of heart in the climax also comes across as very unconvincing. Thankfully, the DILWALE DULHANIA LE JAYENGE [1995] inspired climax makes up for it. 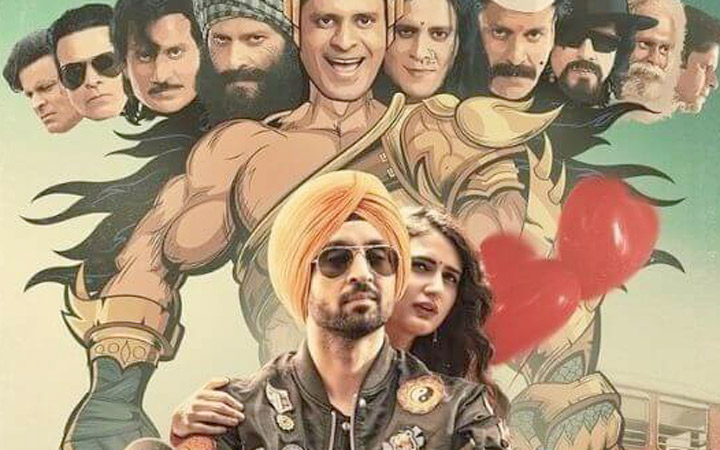 SURAJ PE MANGAL BHARI starts off on a fine note. The entry of Mangal is hilarious and it neatly explains the dedication towards his work. The film drops a bit when Suraj turns into a ‘bad boy’ and when he gets into detective mode. But it picks up once Suraj starts wooing Tulshi. The twist in Tulshi’s tale is unexpected and gives a nice touch. Post-interval, the patch-up between Suraj and Tulshi occurs rather quickly. But the fun continues as Mangal uses a new trick to get back at Suraj. More twists take place in the narrative as new characters get introduced. The finale is predictable but hilarious.

Manoj Bajpayee is energetic and is sure to be loved. One rarely gets to see him in such roles and it’s a pleasure how he puts his best foot forward. Surely, this is one of his most memorable performances! Diljit Dosanjh is as always in his element. He suits the part to the T. Fatima Sana Shaikh is quite good in some scenes. But in a few sequences, her expressions are a bit off. This is especially in the scene where Mangal finds out the truth about her. Annu Kapoor (Shantaram Kaka) is impressive and one wishes he had a longer role. Supriya Pilgaonkar (Rekha Rane) is great and contributes to the humor. Manuj Sharma is nice as Diljit’s sidekick. Manoj Pahwa and Seema Pahwa and Neeraj Sood are alright. Vanshika Sharma is funny. Neha Pendse (Kavya Godbole) is beautiful and has an important part in which she does very well. Vijay Raaz (Chinmay Godbole) is arguably the funniest part about the film. Sadly, he’s hardly there and on top of that, his character is not utilized well. Rohan Shankar (Ashok) leaves a mark. Vivek R Puranik (Ashok’s father), Harsha Gupte (Ashok’s mother) and Anjali Ujawane (Vatsavitri Lady) are fine. Abhishek Banerjee (Dinesh) is okay in the cameo. Karishma Tanna is sizzling in the special number.

Anshuman Mahaley’s cinematography is first-rate. Rajat Poddar’s production design is authentic and reminds one of the 90s. Vijay Ganguly’s choreography is appealing in ‘Basanti’. Jia Bhagia and Mallika Chauhan’s costumes are realistic for all the characters. Fatema’s clothes however don’t seem to be of 1995 but nevertheless, looks glamorous. Rameshwar Bhagat’s editing is fair.

On the whole, SURAJ PE MANGAL BHARI is a decent entertainer and a clean family film that works because of its plot, the depiction of the mid-90s era and the performances.

Salman announced the launch of his new beauty and personal care brand FRSH on social media late on 24 May. By: ABP News | 30 May 2020 05:08 PM (IST) File photo Bollywood superstar actor Salman Khan is helping people in this difficult time. He has started a new business amid this lockdown. Actually, he […]

Chintu Ka Birthday Review: Zee5’s Film Is The Story Of The Hopes Of Bihar’s Family Trapped In Baghdad Amid The Bomb Blasts

The film 'Chintu's Birthday', released on Zee 5, is the story of a Bihar family trapped in Baghdad in dangerous circumstances with the hope of returning to its homeland. By: Ketan dixit | 05 Jun 2020 09:35 PM (IST) Chintu's birthday Drama the director: Satyanshu Singh, Devanshu Singh The artist: Vinay Pathak, Tilottama Shom, Vedanta […]

Women Health In 40s: These 8 things will increase immunity after the age of 40, must include in the diet