The first 3 years since independence was dominated by the young sensation of that era, Dilip Kumar, who delivered two of the three highest grossers of the year with Jugnu (1947) and Shaheed (1948). His sole competitor in the decade was the showman, Raj Kapoor, with one highest grosser of the year in Barsaat (1949). The three years post-independence marked the rise of two of India’s most iconic superstars till date and as they say, the rest is history.

While Dilip Kumar established himself as a tragedy king through the decade of 50’s, it was Raj Kapoor who owned it with three highest grossers of the year in Awaara (1951), Shree 420 (1955) and Anari (1959). While Dilip Kumar kept a rather low profile when it came to top grossers of the year with just one film, Aan (1952), the decade also saw the rise of stars like Dev Anand. 1950’s will also be remembered as the only decade that saw not one, but three female lead films emerging top grossers of the year – Anarkali (1953), Nagin (1954), Mother India (1957) – a phenomenon that has never happened since then . In-fact, ever since 1957, the top grosser of the year is majorly men dominated. While Mother India had the presence of Sunil Dutt, who became a reasonably big name since then, it majorly drew crowds due to a stellar act of Nargis. 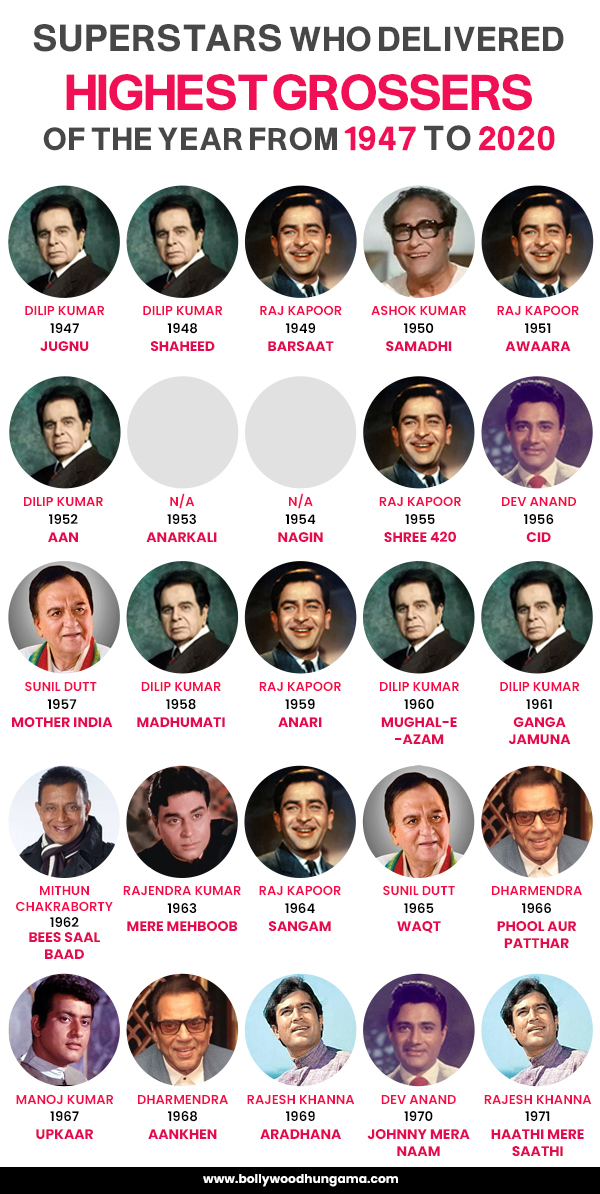 1960 to 1969 – Dharmendra makes a smashing entry, as Dilip Kumar continues to rule the box-office

1960’s was the decade that saw the rise of superstars like Dharmendra and Rajesh Khanna, however, Dilip Kumar and Raj Kapoor continued their strong pull at the box-office even as they entered the third decade of their career. While Rajesh Khanna saw a streak of hit films in the late 60’s, with one of them being a highest grosser of the year, Aradhana (1969), Dharmendra rose like a phoenix and in less than five years of his debut, he managed to deliver two massive grossers in Phool Aur Patthar (1966) and Aankhen (1967). Dilip Kumar on the other hand gave consistently the highest grosser of the year at the start of the decade in Mughal-E-Azam (1960) and Ganga Jamuna (1961).

70’s will always be remembered as the decade of Amitabh Bachchan, as the superstar in the first years of his career had five highest grossing film of the year in Roti Kapda Aur Makaan (1974), Sholay (1975), Amar Akbar Anthony (1977) , Mukaddar Ka Sikandar (1978) and Suhaag (1979). While factually, Dharmendra was a bigger star than Amitabh Bachchan around the release of Sholay, it was a two-hero film with both of them bringing in the audience in different stages of film. While Dharmendra got the initial, in the longer run, Big B emerged a megastar and gave it longevity. In the same decade, Dharmendra had two highest grossers of the year in Seeta Aur Geeta (1972) and Sholay (1975), while the evergreen romantic star, Rajesh Khanna delivered the biggest hit of the year in 1971 with Haathi Mere Saathi. One might argue that Seeta Aur Geeta was more of a Hema Malini biggie and that does hold a lot of weightage in an argument as it featured her in the double role of Seeta and Geeta. However, if we take the re-runs into account, Dharmendra would have his third highest grosser of the decade with Mera Gaon Mera Desh in 1971, which is considered one of the biggest hits in the history of Indian cinema.

Stay tuned for part 3 of the highest grosser of the year series, as we take you through the Shah Rukh Khan phenomenon, the Hrithik Roshan impact, the Aamir Khan consistency and the Salman Khan stardom with a strong comeback.

Sonu Sood and Niti Goyal first took flight on May 29 to take 177 girls stranded in Ernakulam, Kerala from Kochi to Bhubaneswar in Odisha. By: Ravi Jain, ABP News | 05 Jun 2020 09:15 PM (IST) Mumbai: In this difficult period of lockdown, the process of sending migrant laborers and their families to their […]

African-American man George Floyd was cremated today in the city of Houston, USA. George is buried next to his mother's grave. His funeral was held at the city's Fountain of Press Church, where around 500 people were present. During this Source link

Monalisa denied the news of living in a live-in with her older person before marriage. He says that he first mocked this news but now he is afraid. By: ABP News | 12 Jun 2020 02:56 AM (IST) new Delhi: Actor Monalisa is saddened by the news about herself these days. This news has made […]