new Delhi. The number of corona patients in the country has increased to 3 lakh 67 thousand 264. On Wednesday, the maximum number of 13 thousand 107 new patients appeared in one day and 341 lost their lives. A record 2414 positives were reported in Delhi and 583 in Uttar Pradesh. In Tamil Nadu, the number of infected has crossed 50 thousand. It is the second most infected state after Maharashtra.

Meanwhile, there are reports that four women employees were found positive in the Central Investigation Agency (NIA). With this, 8 people have been infected in the agency so far. Earlier on Wednesday evening, Delhi Health Minister Satyendar Jain's corona report came out positive while on Tuesday his test report came negative. AAP MLA Atishi was also found infected. Former Union Minister and RJD leader Raghuvansh Prasad Singh also hit Corona. At the same time, on the instructions of the Center, the investigation fee of Corona in Delhi has been fixed at Rs 2400. 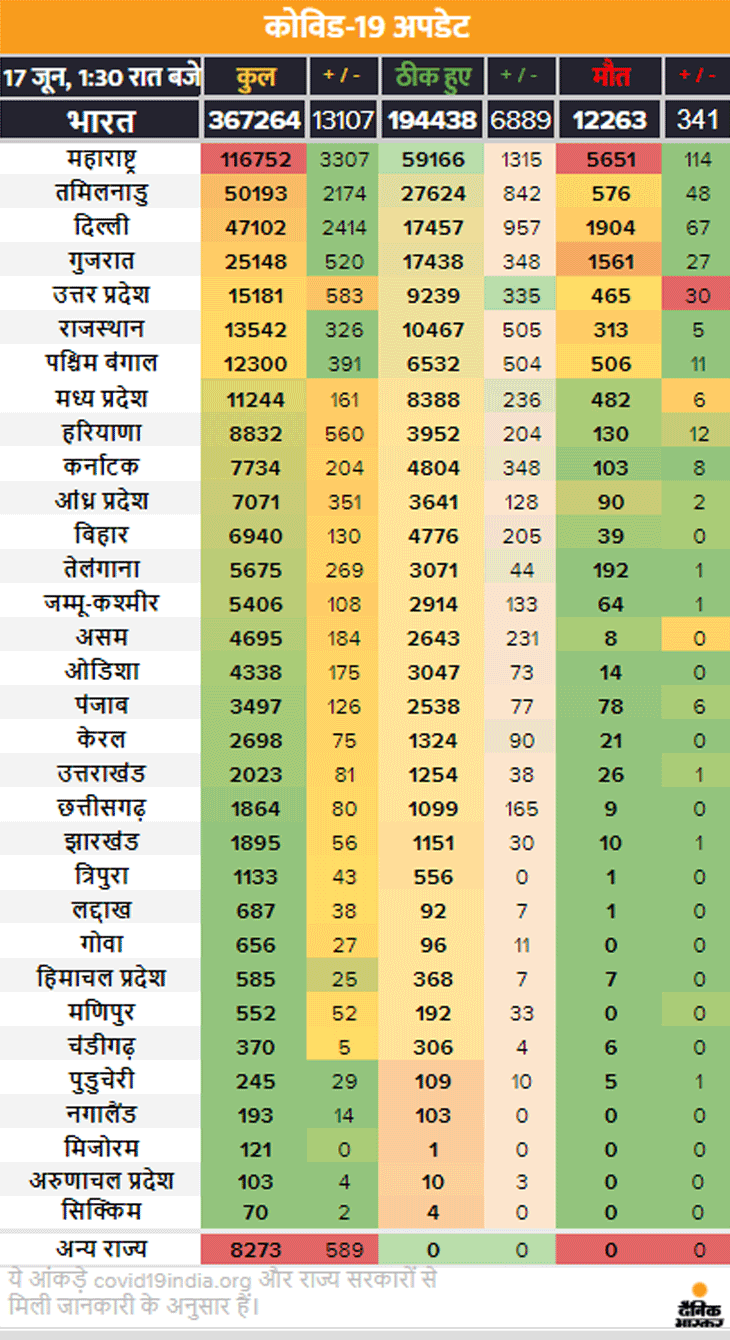 5 days when the highest number of cases occurred

State of 5 states
Madhya Pradesh: On Wednesday, 161 new patients appeared and 6 lost their lives. 49 positive reports were reported in Bhopal, 44 in Indore, 10 each in Khargone and Gwalior. The number of infected in the state has gone up to 11 thousand 244, out of which 2374 are active cases. So far 482 people have died from Corona.

Uttar Pradesh: On Wednesday, 583 Corona patients grew and 30 died. 74 positives were found in Lucknow, 54 in Gautam Buddha Nagar, 44 in Meerut. The number of infected in the state has increased to 15 thousand 181, out of which 5477 are active cases. 465 have lost their lives so far from Corona. The recovery rate has reached 61%.

Rajasthan: On Wednesday, 326 new cases of corona were reported and 5 died. 60 cases were reported in Jaipur, 55 in Dhaulpur and 35 in Jodhpur. The number of infected in the state reached 13 thousand 542, out of which 2762 are active cases. The death toll from Corona rose to 313.

Bihar: On Wednesday, 130 new infections were found and not a single death occurred. With this the number of patients increased to 6940, out of which 2125 are active cases. At the same time, 39 patients have died so far. So far, one lakh 27 thousand 86 samples have been investigated in the state. Apart from this, 4776 patients have been cured.

Heavy rain expected in four divisions including Bhopal, Indore Heavy rain in 2 districts in Rajasthan and rain warning in 31 districts Dainik Bhaskar Jun 06, 2020, 07:35 AM IST Bhopal / Jaipur. Hurricane Nisarg weakened on Friday, but after noon, pre-monsoon rains dampened the cities of many states of the country. There was one […]

Katra's Ashirwad Bhawan was converted into the Quarantine Center in March. Due to Ramadan, the board changed the cooking schedule according to Rojedar Dainik Bhaskar May 23, 2020, 07:13 PM IST area. Around 500 people from the Muslim community are quarantine in the Ashirwad Bhawan of Katra. Most are kept fasting during the holy month […]

10 million people remain infected due to stay at home in America, now more than 1.5 million cases Regional restrictions were relaxed in 11 US states, 4 will be released next week, 5 will continue to be banned Julie Bosman, Amy Harmon, Mitch Smith May 18, 2020, 06:15 AM IST Washington. The rate of corona […]