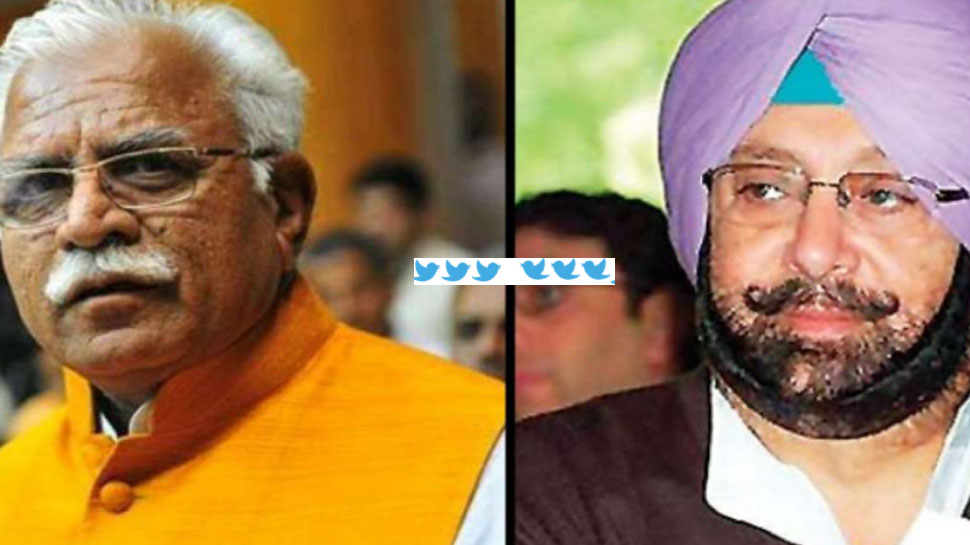 Chandigarh: The Farmer Protest is going on between the Haryana and Punjab government in protest against the three agricultural laws. CM of Haryana Manohar Lal Khattar (Manohar Lal Khattar) are continuously alleging that this peasant movement is the Chief Minister of Punjab Captain Amarinder Singh (Amarinder Singh) and Haryana farmers are not participating in it. However, Punjab Chief Minister Captain Amarinder Singh does not agree with this allegation of the Chief Minister of Haryana. He says that the farmers should not be stopped from going to Delhi to speak their words, but the Haryana government has shown it.

Center has now allowed farmers to enter Delhi, yet the @mlkhattar govt. is resorting to brutal force to stop them from marching peacefully to the national capital? What’s the need for such harsh measures? This barbarism needs to stop right now @mlkhattar ji.

‘Twitter War’ between Haryana-Punjab CM
A new development came to light on Saturday between Manohar Lal Khattar and Captain Amarinder targeting each other. Chief Minister Manohar Lal on Saturday afternoon in Gurugram (Gurugram) Said that I tried to talk to Amarinder Singh six-seven times on the issue of farmers, but he did not come on the line. In response, in the evening, the captain said that Manohar Lal is lying and now he talks ten times. Even if you want to do it, you will not do it.

read this also- Farmers Protest: Kejriwal openly came with farmers, stadium not given for jail

CMO Punjab / @ CMOPb led!
According to Haryana CM Manohar Lal, such a strange situation has happened for the first time, when a Chief Minister is trying to talk to another Chief Minister, but it is not being done. This has happened for the first time in the last 6 years, otherwise whenever we used to call, we used to talk in an hour-and-a-half when it was busy. He openly said that behind the farmer movement there is a conspiracy of the Punjab government. Because the cardholders of his office were leading the movement and leading the farmers.

I’ve been trying to reach out to you for the last 3 days but sadly you decided to stay unreachable – is this how serious you are for farmer’s issues? You’re only tweeting and running away from talks, Why?

Haryana Chief Minister Manohar Lal Khattar also said that the peasant movement is mainly sponsored by the political party Congress of Punjab and some organizations there. The political loaves being held in the name of the movement is also unfortunate. Our officers kept calling them constantly, but Captain Amarinder Singh’s staff used to give the same information every time that conversation is not possible and they talk in a while.

The Haryana CM also said that the political rotis being taken in the name of the farmers’ movement is also unfortunate.

The political loaves being served in the name of farmers are unfortunate.

The Central Government has appealed to the farmers for talks, only a solution will be found through these talks.https://t.co/RjsOWLtE4H pic.twitter.com/czVKjJc6kI