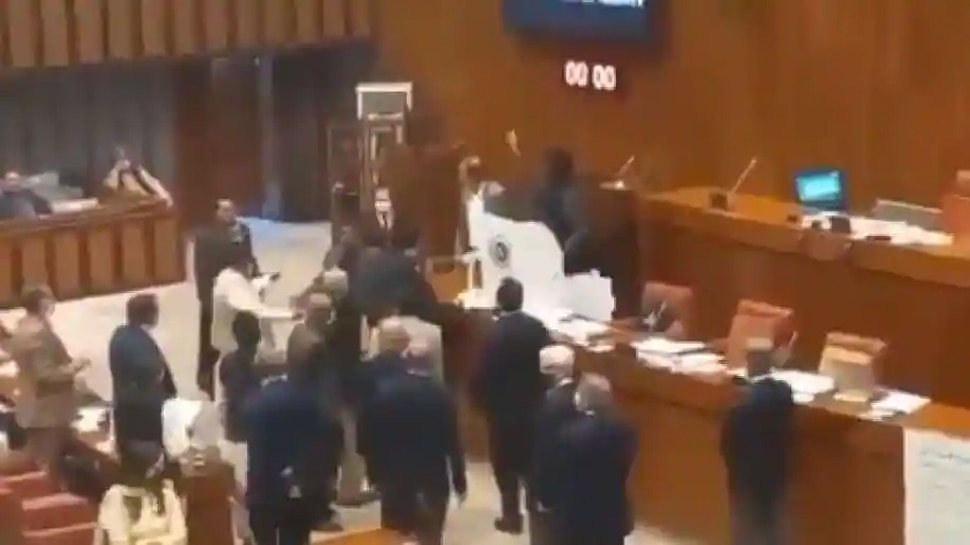 Islamabad: There was a fierce commotion once again in the Parliament of Pakistan. Imran Khan Minister Shibli Faraz (Shibli Faraz) accused the opposition and the Deputy Speaker of putting cameras in the polling booth during the election. At the same time, the opposition has called it a conspiracy of the government. Opposition parties say that intelligence cameras were installed inside the polling booth for espionage. According to the opposition, the government has used cameras to monitor the secret process of voting.

According to the news published in our partner website WION, Pakistan’s Science and Technology Minister Fawad Chaudhry has denied all the allegations. He said that if spy cameras had been installed, no one would have known. Chaudhary said, ‘It is not easy to catch spy cameras, it is possible that MPs have considered CCTV as an intelligence camera’. Significantly, after the oath of 48 newly-elected members in the Pakistan Senate on Friday, the election of president and vice-president has been conducted through secret ballot. However, after the news of the cameras surfaced, this vote is no longer considered a secret.

This is one example of Spy Camera the camera can be fitted in a head of nail even, detection of such cameras is impossible, in all likelihood CCTV Camera cable is misunderstood as spy camera pic.twitter.com/KPu8a2RCpA

Are cameras at Imran’s behest?

As soon as the cameras were revealed by the opposition members, a ruckus ensued, slogans were also raised against the government. Opposition parties attacked the government and said that it should be investigated as to who is under the control of the Senate. After the uproar and protest, when the Election Officer ordered the polling booth to be changed, the situation became normal. Experts believe that Imran Khan (Imran Khan) is in trouble due to the victory of former Prime Minister Yousuf Raza Gilani from Islamabad seat in the Senate elections. Geelani was also voted by some MPs of his party, so it is possible that Imran has installed cameras to keep an eye on his members.