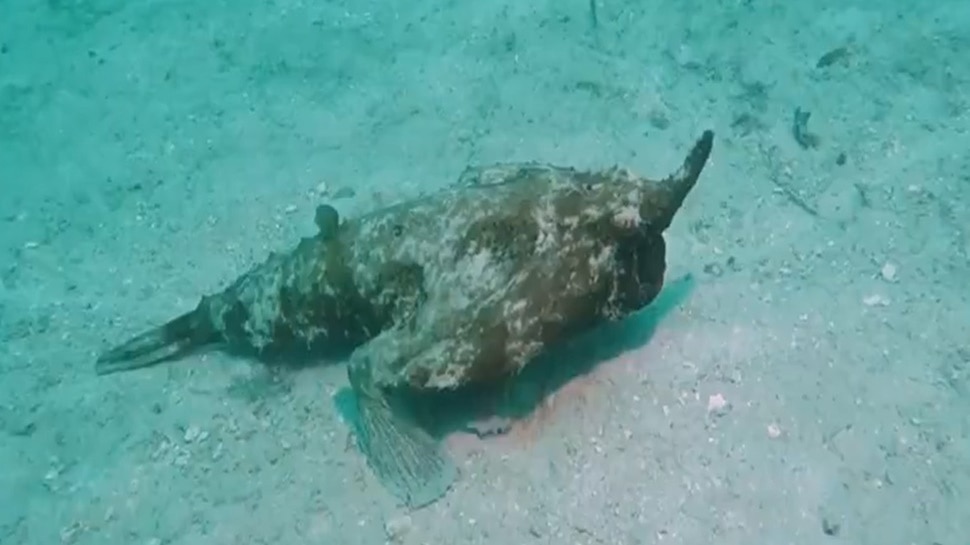 New Delhi You must have seen many types of fish like this. The fish found in the rivers look beige. In the depths of the sea, you can see many colorful and beautiful fish. Everyone likes to keep colorful fish in home and office aquariums, but have you seen rhinoceros fish? If not, then let us show you a surprising video of the year 2020, in which you will be able to know about the fish living on the bottom of the sea whose mouth and color looks like rhinoceros.

It will be surprising to see the trick
It does not look like a fish at all. Its texture is quite different from common fishes. Despite its scary appearance, you will like its trick. Sometimes its movement will look like a dinosaur. This strange species of fish walks around. Caribbean Reef Life expert and author Mickey Charteris Discovered this rare species.

Rhinoceros horn on fish head
These strange and unique fish move slowly in the foothills to get their prey. Who walks on the sea floor with his wings also. At a slow pace, it makes small crabs and small fish its diet. Mickey Charteris saw this fish, which looks like a ferocious wild animal other than the common fish. Mickey has spent a large part of his life in the sea and around. This fish also has a rhinoceros horn on its head.

Caribbean Reef Life Writer Discovery
Mickey Charteris told that I have seen many strange o poor sea creatures but had never seen such fish. It was moving very slowly, seeing that for a moment I did not think that it is really a fish. He told that it does not always go slow like this. She also swims when she needs to.

Charteris, an expert on marine species and author of Caribbean Reef Life, said that she was black on the top with red lips. He believes that he had never seen this scene as a diver before. But what he got to see in the year 2020 will always be remembered by him. Because this fish of a particular species is very rare, which is found in a very specific area.