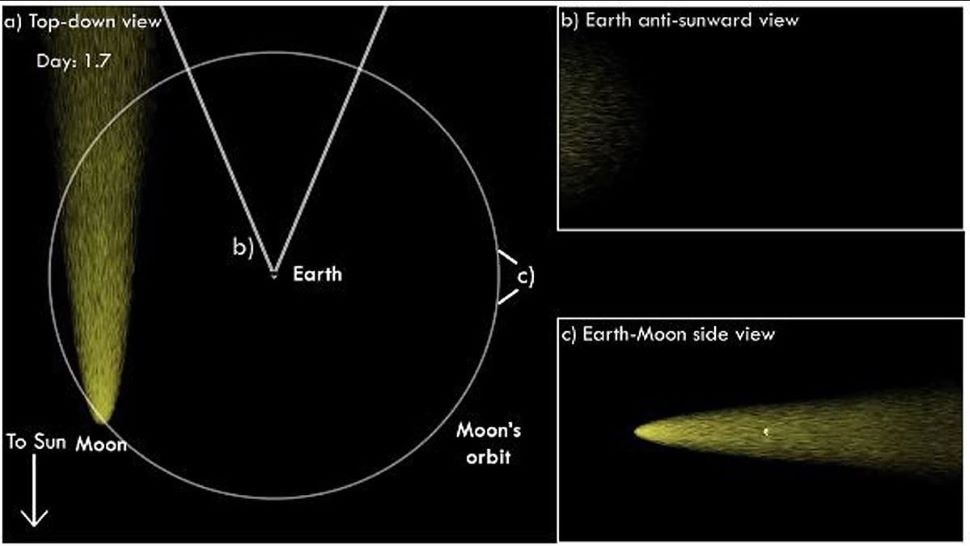 New Delhi: There is a tail of the moon circling around the earth. It comes out at any time in a month. Let me tell you that when it comes out, it also affects the earth. As soon as this tail comes into effect, its earth also covers itself like a scarf cover. This situation is such that in which the moon becomes comet ie comet. Let us know when and how the moon’s tail comes out.

This is how tail is made

The moon is formed once every month as a comet. According to a recently published report in the journal JGR Planets, meteorites are the reason behind the formation of a lunar star. When these meteorites come rapidly and hit the lunar surface, large amounts of sodium atoms are released from that collision in space.

After this event, these sodium atoms released from the moon’s surface, coming in the direction of radiation coming from the sun, rapidly form a tail for millions of kilometers. This event occurs when the moon comes between the sun and the earth. When the sodium wave from the lunar surface comes towards the earth, there are two reasons behind it, first the sun’s radiation storm and the earth’s gravitational force.

The moon has a tail, and Earth wears it like a scarf once a month https://t.co/RBtocnbqAb pic.twitter.com/vF8qAsGBUV

read this also – Karina Oliani: This woman made Guinness record after crossing the boiling Lava Lake at 1187 ° C, watching the video will shake her heart

This tail of the moon surrounds the earth. The good thing is that Lunar Tail is not harmful. It does not have any side effects on the earth. You cannot see Lunar Tail with open eyes. This situation happens every month on the arrival of new moon. This can be seen with a high capacity telescope. In this way, you will see orange tail in the sky.

Five times wider than the diameter of the moon

The width of the lunar tail is five times the diameter of the moon. However, its light is 50 percent less than a person’s ability to see with open eyes. Lunar Sodium Tail, which originated from the Moon, was first introduced in 1990. A Sodium Spot is formed on the moon every month. Which was visible every month, but its light used to be less and less.

Scientists deployed an all-sky camera to study the lunar tail. This camera took 21 thousand photos between 2006 and 2019. When scientists studied these photographs, they came to know a special pattern. This happens most when many meteors hit the lunar surface. Due to these, the flying dust spreads in the space.

This month can be seen

The month of November is the most visible sight of the moon tail (Lunar Tail), because at this time the rain of Leonid Meteor is more. At this time, sodium particles from the lunar surface spread rapidly in space. Solar storms from the sun i.e. electromagnetic particles also hit it. This is the reason why this tail spreads very fast and grows long.