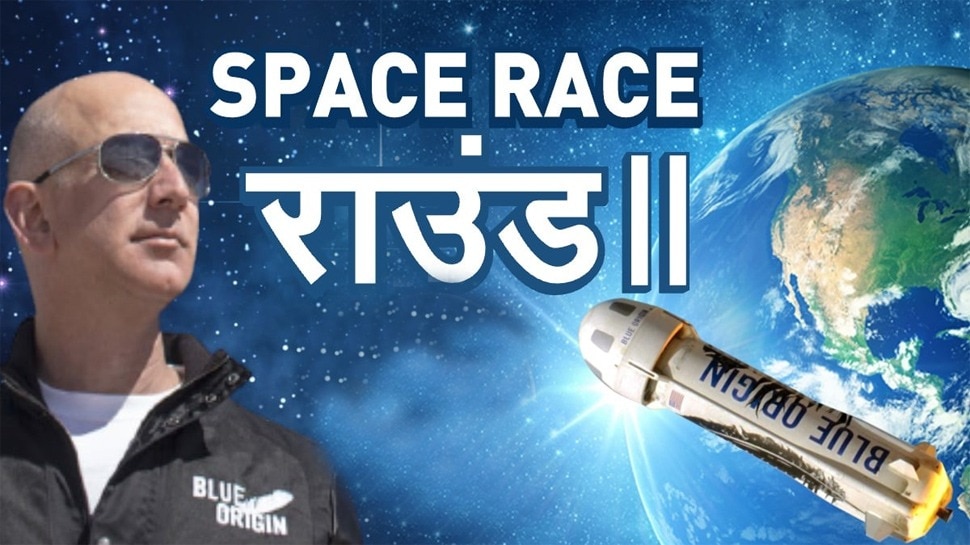 New Delhi: Space is no longer the right of only the space agencies of the countries. Now you don’t even need to be an astronaut to go to space. If you are a billionaire then you can also go to space for tour. Today space is going to prove to be huge for tourism. Amazon founder Jeff Bezos is about to go on a space walk with three tourists.

The biggest thing is India’s role in getting Jeff Bezos to do a space tour. In fact, Indian Sanjal Gawande is also included in the team that made the space shuttle ‘New Shepherd’ from which 4 tourists will go to space. That is, India’s daughter has also contributed in sending Jeff Bezos to space. On July 11, American billionaire Richard Bransen also traveled to space, after Branson it is now Bezos’s turn.

The dream of conquering space, which was seen by Amazon founder Jeff Bezos in the year 2000, is going to be fulfilled in the year 2021. Space Shuttle will now fulfill this dream of Jeff Bezos. Bezos will go on a 60-foot-long Space Shuttle from Earth on July 20. A few hours from now, the space shuttle ‘New Shepherd’ of Bezos’s company Blue Origin is ready to launch from the launching pad in Texas, USA.

How will this mission be?

Jeff Bezos has kept the window seat in his own company’s Space Shuttle with him, three more tourists are going to go across the sky with him. The first of these is the name of Bezos’s brother Mark Bezos. Apart from this, the next name to go to space with Jeff Bezos is Wally Funk, who is 82 years old. Wally Funk is the youngest American woman to receive a pilot’s license.

read this also: Wish to see the fittest woman in the world, it is amazing

Wally Funk was about to go to space in 1960, but due to some reasons she could not go on space travel. Now after 6 decades, the unfulfilled dream of Valley Funk is going to be fulfilled today. Apart from this, 18-year-old Oliver Damon will also be a part of this journey. Oliver’s luck has given him a chance to go to space because until a few days ago, Blue Origin had given this ticket to someone else.

An unknown person had booked a ticket to go to space from Blue Origin by bidding for $ 28 million i.e. about Rs 205 crore, but two days ago that person canceled his ticket, after which Oliver Damon got the lottery. Jeff Bezos is going to make many records along with going on a space walk.

Bezos has chosen the date of July 20 for his space tour, there is a special reason behind it too. In fact, on July 20, 1969, the spaceship with astronauts landed on the moon for the first time and that is why Bezos chose the day of July 20. If Jeff Bezos goes on a space journey, he will also take India’s identity with him.

In fact, the team that designed Bezos’s New Shepherd rocket includes space scientist Sanjal Gawande. Sanjal hails from Kalyan district of Maharashtra. Sanjal, a mechanical engineer from Mumbai University, has been in the US since 2011. Sanjal holds a master’s degree in mechanical engineering from the University of Michigan, USA.

Earlier on July 9, billionaire Richard Branson also traveled to space. He touched space in 90 minutes from the flight of his company Virgin Galactic. Indian-origin Sirisha Bandla also accompanied Branson as a space tourist.

How different is Bezos’ mission?

From Branson to Bezos, India’s contribution to space travel is definitely one or the other. Among NASA scientists, only 36 percent are Indians. That is, no one can imagine going to space without Indians now. Jeff Bezos’s space craft will fly from America today, but on July 11, billionaire Richard Brenson defeated Bezos and traveled to space. How different is the way Bezos and Branson reach space.

Virgin Galactic owner Richard Branson arrived in space from the VSS Unity plane, with 6 people including a pilot with him in his flight. At the same time, billionaire Jeff Bezos will fly on the New Shepherd Space Shuttle and the capsule will separate before reaching space orbit.

read this also: The world’s first underground village, seeing the pictures will leave your mouth wow!

Richard Branson started Virgin Galactic in the year 2004, while Jeff Bezos started the Blue Origin company in the year 2000. The purpose of both was space tourism. Branson’s VSS Unity is 85 km from Earth. Went up to the height, there the passengers felt zero gravity for 4 minutes. Whereas Joseph’s Blue Shepherd is 105 km from the earth. And they will also get a chance to stay in zero gravity for 4 minutes.

Musk will also start the tour

Richard Branson will send 400 flights into space every year from the year 2022. Meaning there will be 5 to 6 tourists in each flight and it is believed that each tourist will have to pay a quarter of two crore rupees to go to space. After Branson and Bezos, the next number will also come from Elon Musk. Musk has also created a space company named SPACE X. His company already works to send satellites and astronauts to space.

The US government sent astronauts to the International Space Center last year through SPACE X. Now Musk is also working on a plan to rotate the tourists to space. His company will also start the business of commercial space tourism by next year.

On the one hand, where America’s billionaires are competing to go to space, on the other hand, India is also working fast on the plan to send humans to space. The Indian space agency ISRO has achieved a big achievement in the recent past with the mission Gaganyaan. ISRO conducted a long duration hot test of the liquid propellant development engine.

ISRO successfully conducted this trial for the third time. On this, Elon Musk, CEO of SPACE X company tweeted and congratulated ISRO. ISRO’s unmanned Gaganyaan mission is likely to be launched by the end of December this year. This mission has been delayed by a year due to Corona.