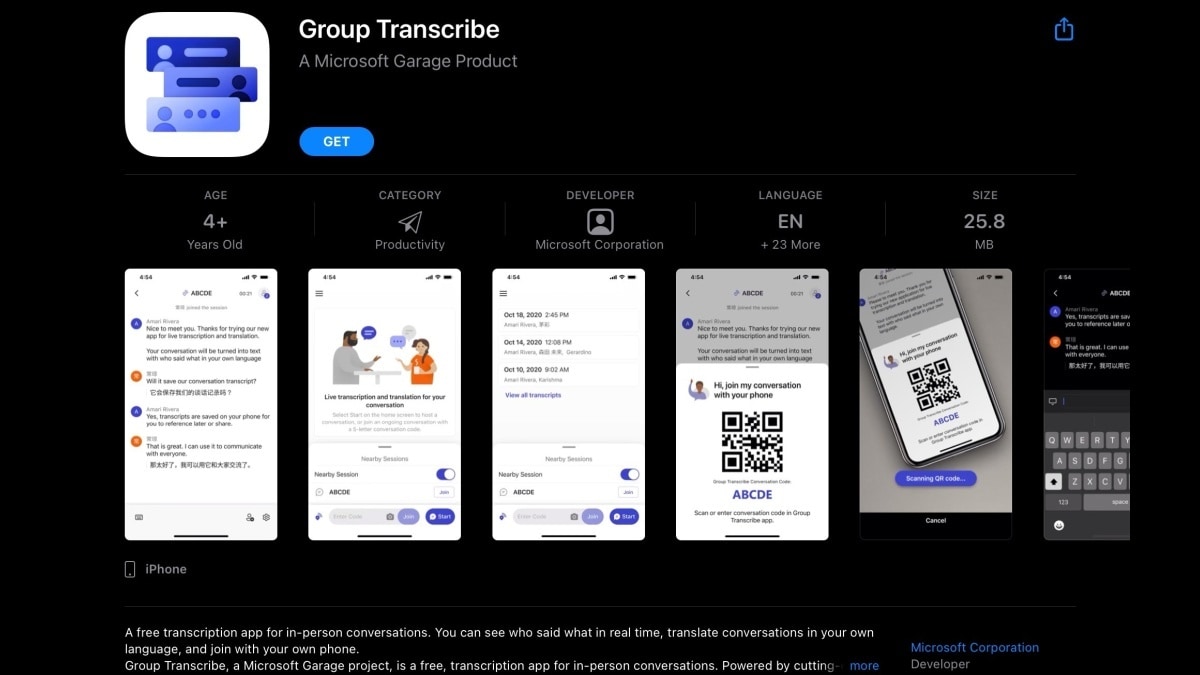 Microsoft Group Transcribe app has been launched by Garage, the experimental department of the software giant. Launched on the iOS platform initially, the app lets multiple users chat together where all their conversations will be transcribed in real time. Microsoft Garage is a platform of employees, customers, and partners to work after-hours and utilize the resources for experimenting new ideas. Some of the popular experiments to emerge from Garage have been SMS Organiser, Xbox’s Adaptive Controller, Seeing AI, Microsoft Kaizala, and Microsoft Launcher for Android, among many others.

Microsoft Garage’s Group Transcribe is an app that allows multiple users sitting in a meeting to transcribe the conversation using their own devices. “This app uses a multi-device approach to provide real-time, high quality transcription and translation, so users can be more present and productive during in-person meetings and conversations,” Microsoft said in a blog post.

According to the FAQs on Microsoft’s Blog, for Group Transcribe to work, participants of a meeting need to have the app on their iPhone or iPad. One participant would start the transcription and others will have to join through a link, QR code, or via Bluetooth. Participants can select whether they wish to share the transcriptions with Microsoft.

Group Transcribe will start transcribing the pointers in the meeting, making note of who says what. The app will auto-translate what is being spoken and will show the original text along with the translation. The transcriptions are saved post-meeting, for reviewing and sharing purposes. There is no limit on how many people can join. However, Microsoft has said the app works best with up to four people. It is not required to sign in but only your name and preferred language to use the app.

Microsoft Garage opened a 8,000-square feet facility in Hyderabad back in 2018, that was the second biggest Microsoft Garage facility in the world after the one in Redmond, Washington, US, at the time. The facility incorporates Hubs for Hackathons, 3D printers, laser cutters, PCB milling machines and a reality room for development of Augmented Reality, Virtual reality, and Mixed Reality.

Affiliate links may be automatically generated – see our ethics statement for details.