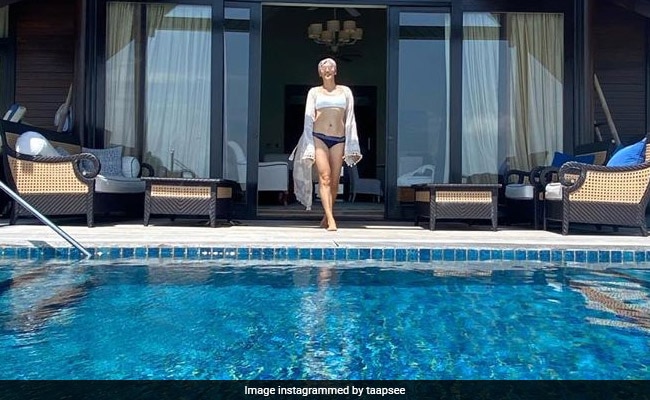 New Delhi: Taapsee Pannu may be back in Mumbai but she can’t stop gushing over her Maldives vacation. The actress is reliving her vacation days by sharing postcard-worthy pictures from the trip. On Tuesday, the actress shared a stunning picture from her getaway and it is easy to see why she is having vacation blues. In the picture shared by the actress, she can be seen posing in front of a stunning location. She wrote in her caption: “Waking up after a week-long dream… Back to reality now.” She accompanied the post with the hashtags #HolidayOver and #MaldivesToMumbai. Take a look at Taapsee Pannu’s post here:

Earlier on Tuesday, she posted a stunning selfie of herself and she wrote: “Some days you really appreciate your natural skin. There’s a different glow to natural, healthy skin. Just let your skin do its thing.”

Here are some more posts from Taapsee’s vacation:

Last year, the actress starred in several films, including Game Over, Badla, Saand Ki Aankh, and Mission Mangal, co-starring Akshay Kumar, Vidya Balan, Sonakshi Sinha, Kriti Kulhari and Sharman Joshi. Taapsee Pannu is best-known for her performances in films such as Pink, Naam Shabana, Soorma, Mulk and Manmarziyaan among others. Her last project was Anubhav Sinha’s 2020 film Thappad, which opened to positive reviews from film critics.